ICL stands for “Implantable Collamer Lens”. They are also very commonly referred to as Phakic IOL’s. They are micro thin implants used for correction for people who are not suitable for LASIK procedures. Also can be helpful for patients of keratoconus. 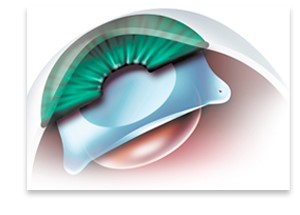 ICL are micro thin lenses implanted over the natural lens inside eye to correct spectacle power. It is similar to a contact lens placed in eye except that a contact lens is temporary and has to be put on daily basis whereas ICL in put inside the eye permanently. The vision with an ICL is better than that of a contact lens because the lens is a non moving lens and is better able to correct cylindrical power along with spherical power.

The implant surgery is done on an out-patient basis and takes less than an hour to perform. The implant generally has very few side effects and is usually without complication. Severe complications occur in less than 1 percent of patients. However, as with any surgery, there are risks. Most are treatable. Also the procedure is reversible as the lens can be surgically removed.

The ICL has several advantages over LASIK surgery. It does not change the shape of the eye, and is removable. In this way, it is possible to ‘reverse’ the surgery by removing the ICL, returning the eye to its pre-operative state. Some studies show better contrast sensitivity and night vision over LASIK results.